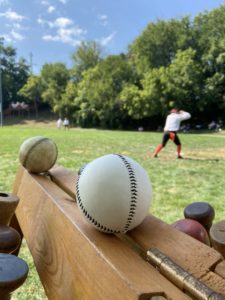 Some of us came back last evening fairly tired out with our hours in the trenches marching through the city.  Our company was on the left flank and acted as part of the reserve.  We acted pleasantly and past through the evening without too much fanfare, but the night was disagreeable.  Our thoughts were on an early rise and if we had enough to battle.  Early campaigns had begun to wither our numbers and bodies, but our spirits were steadfast.  We learned of the return of one of our senior members from west of the Sierra Nevada mountains, but were not expecting good returns.  Much like when we planted those wheat fields two years ago and the weevils destroyed them.  I think it would be wise start anew.

Our campaign started with promise early.  We tallied five spurred by the marksmanship of Mac.  It was told that he has little to offer in his advanced age, but he proved most useful in holding a stick.  We thought, and some prayed that he would find his way back while wandering in the red rocks.  The regiment dug our pits deep in the Northville soil and protected against the shells that our opponent laid towards us.  The sun was not intensely hot as few weeks past and the breeze kept our faces cool.  We should be encouraged by the young kid from Livonia who continues to amaze us.  He moves quickly like the deer in the fields, but also quietly like the squirrels in the trees.  He tricked a runner attempting to advance from one base to another and smiled while doing it!  I think it was because he knew he could take respite in the nearby creek to wash away any stench of wrongness. 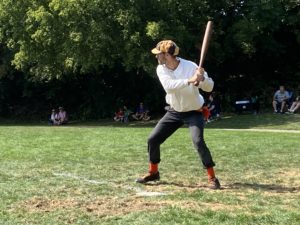 As our team battled, we were eventually joined by our captain.  Normally he leads but he delegated this march to our mapmaker, Scratch.  We should save our rations and use the sums to purchase a time piece for him so he can lead us in our next battle.  Fortunate were we to be battle ready at this time of the season.  Moonlite brought fervor to the plains when he reached the bases as he looked to take more steps than necessary between the first bag and the second.  He nearly put his unit in a pickle, but weathered as we were from our times in New York we did not panic.  We could not tally a single run for four innings, but we were finally able to record one in the sixth inning.  Trouble limped to the plate and found an area in the field to hit and Kid was pleased to score.  We should hope to find a healer for Trouble soon because we fear the use of the saw on his leg.  There is no wood to spare for crutches as we must fortify our bats in the winter. 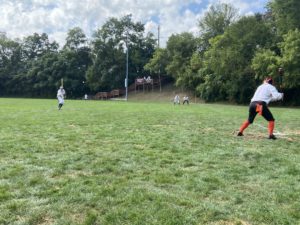 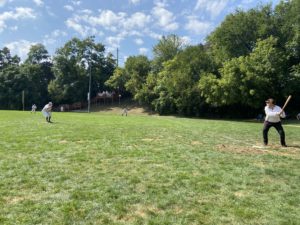 We added three more tallies in the eighth inning in part to Beaker hitting his second double of the day.  He plays very well on the defensive side, but may be better when he strikes.  A combo I have seen and come to appreciate from the youth in Northville.  The final inning saw us tally three more runs and the Early Risers respond with two of their own for a final score of 12-3.  We hope to be ready to open fire tomorrow afternoon but this is doubtful.  Our wounded continue to pile up and reserves are few.  There are only so many old men willing to join us as we try to finish this campaign.  Tonight horses and wagons will haul ordnance and these provisions are needed for an encounter of no regular opponent.