I take pen to hand to inform you that we are all well and hope that this letter may find you all well.  The base ball club from Northville are in good spirits.  We are in Mumford, NY at present.  We moved into the area last Friday with the intent of staying for some time.  Some are camped in a vacant lot, others farther away but all ready to heed the call.  A few days ago we managed to hold our own against a club from Phelps, New York.  Fortune found favor with us and we managed to handle the batted balls all over the short grass and rocky terrain of the field.  We found ourselves getting plenty of exercise running around the bases.  The men gathered for a celebration of gifted food and pop skull.  A pleasure not to taste hardtack for one meal.  Some tried their hand learning a game of card which required deception and trickery.  Oh, how I wish The Rev was there to pray for their souls.

Yesterday we rose early to start formation.  There was one of which we were unsure would be able to stand.  He was unkempt and smelled of bark juice.  He settled with northerners and there was talk when he was much younger that he could be a traitor.  He staggered into camp and his wound was not serious.  He may be home before long.  He will be watched closely by Capt. Stitch, who has the entire confidence of the team.  Attention turned towards a regiment from Pennsylvania and we were again victorious.  I shall hasten with my letter, and then go forth and take a stroll among the grounds of this glorious park.  Trees as far as the eyes can see and sunlight warms the grass lightly blowing with the gentle wind.  How I miss home and the smell of good cooking.  I should want for nothing if the dear Lord sees that we all make it back home.

Time quickly moved and we gathered for an afternoon role call.  Word reached us that we must prepare for another engagement.  We have had nothing to eat since early breakfast before formation and more time standing guard.  The hunger in our stomachs must have given reason to our quick and often striking.  I shall like to visit this place called Spring Creek in the nearby town of Rochester, New York.  I will dream of it as we rest our weary heads and look up at the stars in the warm summer night. 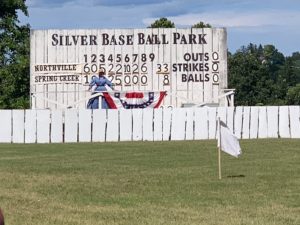 A familiar foe met us on the Great Meadows.  Each pitch and swing was to be magnified in an effort to reach our goal.  The anticipation of the match was well received by the many who witnessed.  The Rochester club was as talented as ever and to come out victorious was a great accomplishment indeed.  Such tales will be told of the play that left some cross in Mumford and much more speechless.  Bullfrog and Kid will enjoy fine dining of sweet potatoes, chicken, molasses and wheat bread for years to come.

The Eclipse came upon one last hill unable to overtake it.  We were met from the veteran club of Talbot, Maryland.  Polished and sure of their position, the Fairplays were able to withstand early deficits and supply enough runs late in the battle.  There were many moments that will etch memories forever in my head, but one which I think I shall never see again.  Trailing by one run in the seventh inning and a runner on third base, the Fairplays sent up Cap to strike.  He carried his bat to the plate.  The material out of which it was made was from the root of a tree in the Adirondacks.  He swung as mightily as I have ever witnessed a striker do and caused quite a commotion.  However it was the fleet-footed Badger in the outfield that sprang into action and caught it while in motion with his back to the infield.  Despite a superb showing by the Eclipse, we fell short as a battery of men on this field, but with our heads held high.

Our team is in fine condition and went into the match with perfect cheerfulness.  This was the best encounter ever known.  Every man stood at his position and competed bravely.  The boys in orange and black are all brothers and work to each others honor.

So nothing further at present but steadfast in your team until death.