A standard humid August day greeted the visiting nine from Historic Fort Wayne on the grounds of Ford Field. Led by their captain, Snurek, the Early Risers returned to Northville after a small hiatus and showcased their young talent for the game that left those who witnessed it certain that their future looked promising.
The advantageous coin flip allowed the Eclipse to stretch their legs on the field of green first and working in haste, Stitch, retired the first three Early Riser strikers in succession. The Eclipse tallied on their first approach to the plate when Frisco sought refuge at second after a well-placed strike to the left side of the outfield. He was rewarded the continuation of his trip around the bags when TinMan walked to the plate. Like a preacher extolling a sermon on the holiest day of the week, TinMan served his weekly contribution to the delight of the masses. Retribution would be costly for the Eclipse as they failed to plate another tally in the inning despite a “Full Eclipse” and it would be an inkling of fate to come. The Early Risers would eventually tie the match in their third inning with the help of a double from Stranger and assist from Mad Dog that would plate him. An inning later, singles from Hickory Stick and Snurtek, would prove costly in the Eclipse attempt to keep all things square. With two hands retired, Pokey lofted a seemingly innocuous fly to right that played to two tallies. Meanwhile, the Northville bats failed to direct safe passage for any balls out of reach from the capable hands of the Early Risers. Fine fielding from both clubs prevented striker after striker from writing home about their success at the plate and allowing either club to rest comfortably. Such an occurrence was witnessed in the fifth frame when Scally lofted a sure-fire hit above second base and in front of the mid-fielder. Time clearly stood still and Bender, not needing any further assistance in coming out of his already tattered high button shoes, chased down the ball and plucked it from the air after one bound before a certain second meeting with the earth. As if his club needed any more reason to be proud of him, Bender wasn’t quite done with his prowess on the diamond. Mad Dog fell victim to a ground ball up the middle of the diamond that Bender somehow impeded movement with his legs and proceeded to hurl a perfect hop of a strike to first. Runners indeed were at a premium and fortunately for the Detroit club they found favor with four consecutive singles. Hatchet and Hickory Stick scored on assists from Snurtek and Stranger and the Early Risers lead was up to four. The Eclipse continued to make solid contact and as was the case when Stitch launched a cannon ball of a shot between the left and center fielders. Normally not playable and destined to test the stamina of a runner as he traverses across the diamond, Pokey shed his handle and gave life to his alter ego … Spirited. Describing the effort as outstanding would lack proper evaluation. Running down the path of the ball from his position in left field, Pokey sprawled out in one last effort to his left to snare the ball before it passed him and lay exhausted on his back in the dirt to collect his bearings. The distant cheering for his effort was tempered in his head with the sure rattle he obtained. Even two out doubles by Frisco and Jaundice in successive innings couldn’t amount to plating another run for the Eclipse as the Early Risers earned the victory, five to one. 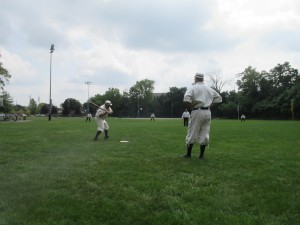 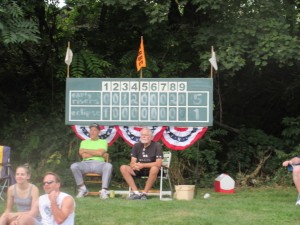