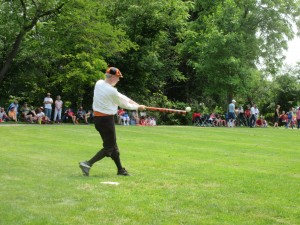 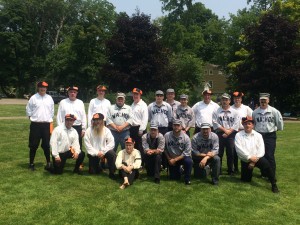 Ford Field in Northville was once again the idyllic setting for a historical base ball match.  The day began with a casual stroll along the sun-kissed streets of downtown Northville lined with thousands of enthusiasts celebrating the independence of this great nation.  Laughter and good cheer filled the air as the participants waved and acknowledged the crowd, some even participating in an impromptu game of catch with Mac.

After player introductions, the visiting Wahoos from Royal Oak wasted little time in marking their name on the scoreboard.  Blessed with speed normally seen on young colts, Sparky led of the inning with an infield single.  Replaced on the bath paths with a fielder’s choice off the bat of Dizzy, the Wahoos brought up the iron of their order.  The father-son duo of Mallet and Hammer moved Dizzy to third where Teufel was only too happy to oblige bringing him across the plate safely with a sharp single up the middle.  And before the cranks had time to settle in, the Wahoos led the top of the 1st, 1-0.

Not wanting the Wahoos to set off all the fireworks, the Eclipse responded just as quickly.   Leading off, Frisco and Mac recorded consecutive singles while Bender doubled and drove in the first Eclipse run.  Hitting in the dubious fourth spot, Jaundice continued his yeoman service and delivered another double tallying two more and just like that the Eclipse led 3-1.  Both teams continued to thwart run scoring opportunities with excellent defense until the Wahoos closed the gap in the 4th inning with Teufel once again sparking the scoring with a leadoff single and eventually tallying courtesy of a Mud Dog single.  An inning later it was the Eclipse top of the lineup that once again ignited a 3-run inning.  Three consecutive singles allowed the next three strikers of Jaundice, Rev and Doc to plate three more runs and after 5 innings the Eclipse held a 6-2 advantage.  Offensively for both teams the remaining 4 innings were a dud in terms of scoring as strike after hurl was properly fielded and strikers were retired without making their passage back home.  As a result, the Eclipse ended up securing the decision and enjoyed a hearty post match meal with their guests and friends.