A warm muggy Sunday afternoon in Northville brought together the Cornshuckers and Eclipse for a showcase of young talent at Ford Field.  The match was in a tenuous spot after the area witnessed large amounts of  rain.  Such a desolate scene I hope to never see again.  Some of the trails are still under water.  No description that I can write will give adequate conception of the discomfort and wretchedness this must give rise to.

With the match squared even at two tallies for each club in the third inning, the Eclipse plated the lead run when Sunshine singled to the left side and advanced to second base on the overthrow.  Speed and luscious golden locks were bestowed at an early age to Sunshine and he has managed to take advantage of both.  Badger would bring Sunshine home on a fielder’s choice to the left side, but the Eclipse could not manage to take advantage of two additional runners later in the inning. 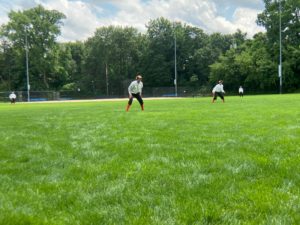 The Cornshuckers evened the game in the fourth when Muffin baked a lead-off single and eventually scored on a misplay at first trying to force out Cocoa.  The teams traded defensive gems to hold each club scoreless for the next few frames, and was highlighted in the top of the seventh inning when Bullfrog hit a one out single to the right field hill.  He would advance to second and nearly scored when Sunshine came to the plate with two outs and lined a ball to left field only to see Marbles running and then dive to his left side and scoop the ball up before it bounced off the grass and second time.  That momentum carried into the bottom half of the inning when Ace lead off with a single and advanced to second on a hit to the right field hill by Marbles.  Copper would bring Ace around to score on a hard hit to center and a 4-3 lead for Canton.

The Eclipse were quick respond in the top of the eighth inning as Beaker led off with a strong single to right followed by a towering double to right center by Moonlite.  A grounder to the right side by Kid plated Beaker and tied the game and the Eclipse were unable to bring home Moonlite as Teddy from the Cornshuckers recorded the last out of the inning on a foul tip behind the plate which required hands of illusion.  Some spectators over the summers at Ford Field may have become accustomed to the skillful hands of Mac from the Eclipse at the corner, but he was practicing his interpretation of social distancing by spending his time six states away instead of the preferable six feet. 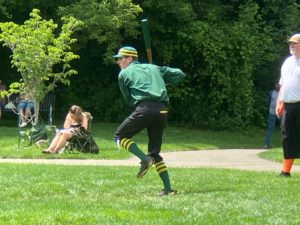 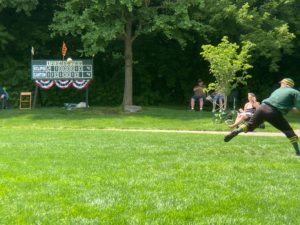 The bottom of the ninth inning brought a tie score of 4-4 and the Canton club had an Ace in their pocket and proceeded to use it at the table.  A perfectly lightly tapped single to the left side allowed him to reach first base easily where he moved to second by Who and eventually scored the winning run on a single to center.  The Canton club retained their hold on the Michigan Cup as the best team in the state. 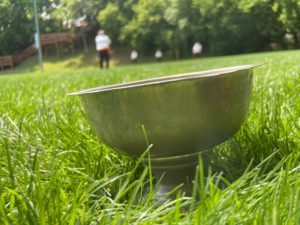 The Eclipse will let this one sit for awhile as they prep for a trip to Dearborn and a tough match at Greenfield Village in three weeks.