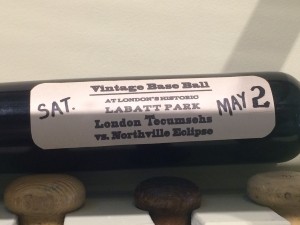 Eight long months and another cold, blustery winter finally gave way to the true indoctrination of Spring … base ball.

Laying dormant beneath the snow for far too many days, Labatt Memorial Park came to life on Saturday, May 2nd with the setting of old, but congenial rivals … the London Tecumsehs and the Northville Eclipse.  Blessed on this beautiful day, the spectators came to support the match and a benefit for the oldest building in London, Ontario.  The Eldon House, which was celebrating its 180th year, was part of a scenic backdrop to the city nestled among trees and the Thames River.  After a brief ceremony and winning the inaugural bat toss, the newly appointed captain for the Eclipse, Stitch, instructed his club of nine to strike first.  His tactics worked as Frisco, leading off the season, started the game with a single.  Three runs would tally in the inning, followed by three more in the second and the Eclipse’s bats started the season off quickly.  Leading 10-0 in the sixth, the Tecumsehs scratched a run across and followed that effort two frames later with five runs to close the gap.  It seemed as though the long journey had begun to settle in on the black and orange, but starting hurler, Tin Man, reached back in his closet of tricks and closed the door after 119 offerings.  Aided by two aces tallied apiece from Chip, Tin Man and Doc, the Eclipse totaled 11 to London’s 6.  All Eclipse Nine contributed in the scoring, including two runs batted in by the ballist formerly known as Whiskers.  The Eclipse look to continue their good fortune when they travel to Timbertown to meet with the challenging Monitor Base Ball Club of Chelsea.