The club from Northville gathered together and loaded their few private belongings inside covered wagons and made their annual summer trek across the dry, hot plains of lower Michigan into the picturesque settlement of Dearborn.  After a ceremonious welcome from the local townsfolk and a walk to the field with great fanfare and robust music, the host Lah-De-Dahs and Eclipse staged a match of base ball. 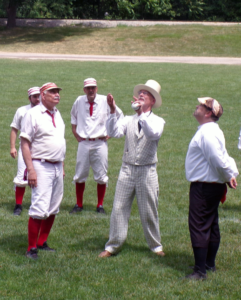 The Eclipse began the scoring when Badger, with one man already out, reached first on a single to the left side.  An out later, TinMan laced a two-base hit to left field plating Badger.  Having been through the mill from previous seasons, the Eclipse knew they had no time to grab a root and instead needed to continue to tally runs against the veteran club from Dearborn.  In the second inning, Beaker and Bullfrog began with consecutive singles to the outfield.  Stories of Trouble would be whispered among the ranks that he sauntered up to the plate that afternoon fresh off a full night of drinking bark juice, but he quickly put them to rest with a sharp single to left easily scoring the nimble Beaker while Bullfrog advanced to third.  Chip would plate Bullfrog on her plate appearance and the Eclipse led by three runs early.  A few more defensive plays in the bottom of the second inning would serve as a premonition for top rail fielding by both teams this day.  Kid would add a tally for the Eclipse in the third inning on a cannon shot to right field that would see him advance to second base.  TinMan would advance him one bag on a single to the left side and Jaundice would bring him home on a peaked grounder to the first base man.

The Lah-De-Dahs, toeing the mark, would recover and tally two runs in each of the next two innings to even the match at four.  The sixth and seventh innings would result in scoreless results for both clubs as the grit on the faces of the ballists showed the passion of the game they were playing.

The Eclipse, with the assistance of a Bullfrog single, were able to scratch a run across in the eighth inning, despite the solid defensive efforts of the Lah-De-Dahs and their third of four double plays for the afternoon.  The Northville nine added an additional tally in the final inning when Beaker, who finished tied with a club-high four hits with Bullfrog, was plated home by a single to left by Stitch.  The Eclipse then proceeded to stifle a late inning bid by the Lah-De-Dahs to tie or possibly win the match with more of the same sensational fielding of the horse hide that is becoming unfavorably common to their opponents.  The Eclipse return home to host the amiable Actives from Woodstock before reuniting with local clubs at historic Ft. Wayne.